Japan has always been on the top of our travel list. Already in 2011 it was a planned destination during our world trip, but when the Tsunami and Fukushima happened, we had to postpone our trip to Nippon. But we finally made it!  For more than eight weeks we have been exploring the Land of the rising Sun. In the first five weeks we visited the bigger cities and tourist attractions with the help of a railway pass. But although the Japanese regional and local transport system is amazing, you are still bond to main routes and to cities, so after many Shinkansen-rides we yearned for a more individual way to see Japan. Luckily, after some research, we found another amazing option to explore Japan: Renting a camper van!
Like our travels through New Zealand and Australia, we could drive with our own mobile home to places away from the main travel routes (and mass tourism). And even better, we could stop and stay where ever we liked. Because sleeping in a camper van in Japan is extremely easy. First of all, you will find lots of official roadside stations – so called Michi-no-Ekis. They mostly offer a toilet, Wifi, drinks, food, and information about the area. On this website you can search for those stations and also filter your search for special features: https://www.michi-no-eki.jp/stations/searche. And secondly, in Japan you can sleep nearly anywhere you want. Just show some respect and keep it tidy and nobody will mind. At least this is what we experienced. 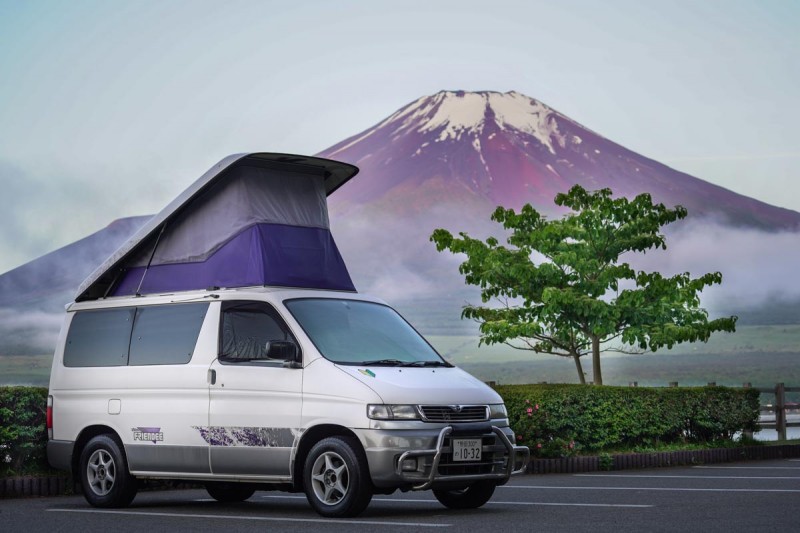 Furthermore all over the country one can find so called “Onsens”. Those hot springs are one of the best and most relaxing ways in Japan to practise some personal hygiene and meet locals in a very intimate way ;-). As Japan is a volcanically active country, it has thousands of these often beautiful bathing facilities. And if there is no hot spring around, you will at least find a Sentō. Those public bathing houses offer different inside or outside basins with different temperatures and various saunas and are a perfect way to end a long travel day with some relaxation. So while most camper vans in Japan don’t have their own toilet or shower, we never missed them. But be aware! Public baths often don’t allow tattoos! Steffen therefore bought a lot of bandage and we plastered it on his upper arm 😉 It was probably obvious but Japanese people are usually too shy and too respectful to ask you to take the bandage off. The costs for Onsens or Sentōs were usually around 300 to 1000 Yen. Our daughter India (with 4 years) often got in for free.

During our search for a Japanese camper rental company we came across Japan Campers, which we can definitely recommend! They not only offer professional service and well equipped cars, but what is really important in Japan – they speak proper English. The manager himself is from New Zealand and all the staff we dealt with spoke fluent English. Although some other rental websites we found also had an English version, but it was already clear while reading their homepages that their English was not good. And the subsequent email correspondence proved us right, as it was hard to understand and communicate. This makes hiring a van in Japan really difficult. But thanks to the recommendation from other travellers we were lucky to have found Japan Campers – based very close to the Narita Airport of Tokyo. The staff picked us up from the Narita train station and also dropped us there after the trip. Communication was never a problem and they were always trying their best to fulfil our needs. We never felt like customers but more like friends. And best of all: price-wise they were the cheapest we found.

In the end we decided to rent a mid-sized camper van – a Mazda Bongo with pop-up-rooftop – for 20 days and had the time of our lives. Japan Campers provided us not only with the van but all the equipment you need (f.e. bedding, cooking utensils, small table, chair, lamps, travel books) as well as an I-pad for route planning and with very helpful apps. And anything that was missing was easily available in one of the many 100-yen-shops all around Japan. So we were ready to hit the road and explore Japan along our own route in our own pace. Freedom! Here is a little video from our road trip:

Here are some tips concerning travelling with your own car: It is good to know, that Japan has a lot of toll roads, which enable you to travel faster (100 km/h)  than the usual 40 to 60 km/h. But we mostly tried to avoid them, as the tolls can easily mount up to $60+ a day. Furthermore be aware that there is left-hand-traffic and that the roads are often really narrow. But as Japanese drivers are very respectful and Steffen is used to drive a van on the left side, we had no trouble at all.
So when we planned our route, we could focus on places in the nature as well as off the beaten track. When you leave the urban part of Japan’s metropolises you encounter an abundance of hiking and pilgrimage paths surrounded by amazing nature and national parks. We experienced white beaches, rocky coastlines, snowy mountains, volcanoes, and magical forests. As we wanted to enjoy our road trip stress free, we minimized our route to three main destinations. First we drove to the Izu Peninsula. On the way there we stopped at one of the five lakes surrounding Mount Fuji for our first night in the van. After the Izu Peninsula we went to the Kii Peninsula and then into the mountains to the Japanese Alps. You can read more details about our trip and those three destinations in our upcoming posts.

Japan is also famous for its amazing food. Although our budget was quite tight and we cooked a lot in our van, we enjoyed the different tastes of Japanese cuisine. The food in general was really yummy but not heavy. We loved our ramen soup, ate a lot of sushi and tried lots of different things from the stalls. Also the famous bento boxes with ready meals where part of our diet. These are available in any supermarket like SevenEleven or Familymart, which you can find on every corner. But we have to confess, we could not get used to all of the different tastes of Japan, like Nattō.

But not only Japan’s breathtaking nature and incredible food are extraordinary. Especially its rich culture is just mind blowing! There are temples and shrines everywhere and religion is still a big part of Japanese everyday life. And we think their preservation of culture and tradition combined with their attitude to respect makes Japan the safest and most relaxed place to travel around. It is an experience which you won’t find in any other country (and we have seen a lot). Most Japanese people will smile at you and treat you with an overwhelming hospitality. And in case you travel with a child, they will get spoiled wherever they go. India got scarves, origami, drinks, sweets and lots and lots of smiles and attention, wherever she went. It was a road trip, we all will never forget!

seesaw with a monk Japan

One thought on “Roadtrip through Japan”